I actually hope to put up documentation and a tutorial for this soon enough (and I know the post is pretty late already). Anyway, here it is. 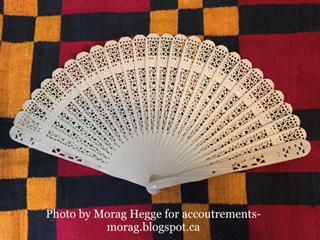 Challenge/What the item is: A Regency/ Empire brisé fan. It was a simple sandalwood fan that I re-shaped (filed down/sanded and sawed- hence the scalloped edges) and re-strung (replaced the plastic thread with silk) to give it a more early 19th century look.

How historically accurate is it? I tried to give the edges a scalloped shape similar to photos I've seen of extant fans, and cut off part of the bottom to make the bottom of the fan end closer to the pin. Most of the examples I saw while researching this made of ivory or horn, rather than wood, and had ribbon to hold them together rather then thread (the slats are so thin though that I didn't want to risk ruining them by carving larger holes in them. Although the angle of opening of the fan is ok for this time (as far as I know...) if I were handier with rivets I'd also take out some slats and make the fan opening angle more acute.

Hours to complete: Estimating 5, including time for figuring out how to do it.

First worn: Not yet.